Child murder in the Netherlands is increasing and decreasing

In several industrialized countries, the number of child killings is seemingly connected to economic strain and unemployment rates. While this connection seems plausible, it still deserves a level of skepticism.

As opposed to other industrialized countries, filicide is relatively uncommon in the Netherlands, occurring on average around 8 or 9 times a year. Filicide is a term used to describe the rare incident of when a parent kills their own child, for example when a mother suffocates a newborn, or when a father beats his son to death.

In recent years, researchers have started to gain a better grasp as to the circumstances and details of filicide in the Netherlands. They have been able to do this with the European Homicide Monitor (EHM), an initiative to accumulate all the extractable information on homicide cases in the Netherlands for the additional purpose of forming comparisons with other European countries, such as Sweden and Finland. The EHM has provided a lot of interesting insights about the situations in which parents kill their own children, the characteristics of the perpetrator and the victim, and the motive behind the killing. For example, in the Netherlands children most often died at the hands of physical abuse resulting in the child’s death, whereas in Sweden strangulation and suffocation are more often the cause of death.

Due to its infrequency and multifactorial nature, it is difficult to draw conclusions about filicide that could be used to predict and prevent the crime. Fortunately, one study compared infanticide trends in 28 different countries and found an overall downward trend in almost all European countries since the 1960s. Surprisingly, however, the Netherlands was one of the few exceptions in which a mild upward trend was found over the past 50 years. An insufficient understanding of the Dutch escalation of filicide is inspiring researchers at the Institute of Security and Global Affairs to use the EHM and its available data from 1992 onwards to replicate this finding and investigate whether there has indeed been an increase in parents killing their own children over a 25 year period.

Although the results thus far are merely preliminary, they partially support previous findings that filicide has been increasing. The absolute number of cases expectantly fluctuate from year to year. It is therefore important to take into consideration not only the population growth of under 18s, but also the relatively low sample sizes from year to year. Bearing this in mind, the trends thus far show a steady increase of filicide from the early 1990s to the period 2007-2011, with the rate increasing from 1.9 to its peak at 3.6 cases of filicide per million (under age 18). Despite the initial increase since 1992, rates seemed to drop significantly in the period between 2012-2016, resulting in rates of ‘merely’ 1.7 per million.

The most probing question when looking at this filicide trend is how does one explain the steady increase in filicide rates and its sudden drop. Other countries have also undertaken the challenge of explaining child homicide trends in their respective countries. In Japan, they found filicide rates to closely trail unemployment rates. Whereas in Sweden, they attributed their decline in child homicide to the increased prescription of antidepressant medication. Finland provided a myriad of explanations for their decreased filicide rates since the 1960s, from increased urbanization and unstable households, to smaller families and the introduction of new forms of contraceptives.

When speculating about which factors play a role in the peak during the period 2007-2011 in the Netherlands, it is difficult not to think that the economic strain following the financial crisis may have had an influence. If proven to be true, this would not have been the first time in the Netherlands where an increase in unemployment rates was linked to an increase in homicide rates. According to strain theory, factors such as unemployment can put an individual under considerable amounts of strain, resulting in pent up frustration and aggression, some rather unfortunately taking out their frustration on their own offspring, with a tragic ending to the child’s life as a result. Nevertheless, all-encompassing explanations such as economic strain should be scrutinized with a healthy dose of skepticism. Not only are there an innumerable amount of factors that play a role in a child’s death, but the number of child homicide cases in the Netherlands is so modest that one could never possibly discern any predictive value from these analyses.

Fortunately, in the period between 2012 and 2016 filicide rates have been rapidly decreasing, with only two children dying at the hands of their parents in the Netherlands in 2016. So whether this decrease is due to the decline in unemployment rates or not, an already rare occasion is seemingly becoming even more uncommon. The hope is that these filicide rates slowly decline into non-existence in the future. 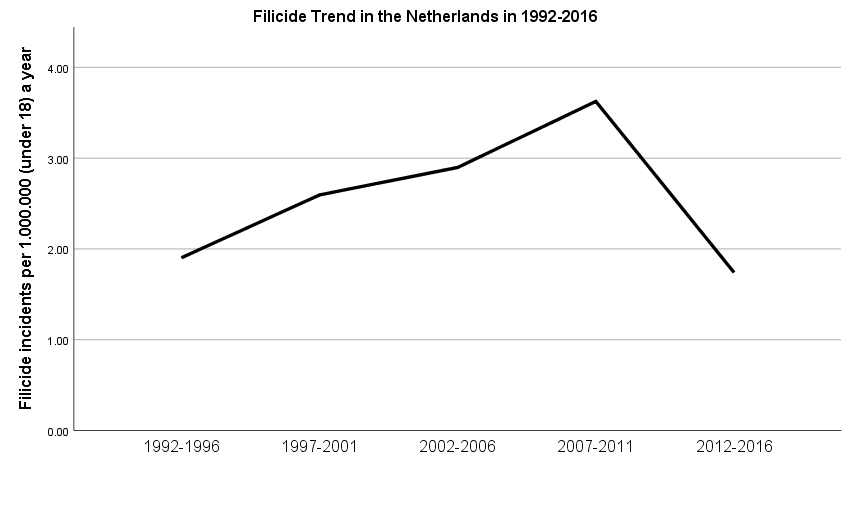