When studying cooperation in the intelligence studies, more attention should be paid to the deliberative, contingent, and personal aspects of intelligence liaison.

It is one of the most secretive parts of the world of intelligence: liaison. After almost every terrorist attack in the last few years, we have heard commentators say that intelligence and security services should exchange more data and should cooperate better in order to prevent attacks from happening. If they only trusted each other more with their data, then they would do a better job at preventing terrorism from materializing.

End of March, beginning of April, a group of academics met in the Wilson Center and the German Historical Institute in Washington to discuss the genesis and historical developments of the transatlantic intelligence liaison. Although the conference took place a while ago, it was aired on the American television station C-span recently. In the three-day conference, a large number of panelists presented very interesting takes on how the ‘special relationship’ between the British and American intelligence community emerged throughout the Second World War, whilst they shed light on both the American and the European intelligence perspectives, interests, and activities.

However, already from the earliest postwar years, the Dutch were trying to befriend the Americans as well. From the later 1940s the intelligence liaison intensified and from the early 1950s the CIA was the most important intelligence partner of the Dutch security service. The relation was very beneficial for the Dutch: in the 1960s the salaries of 10% of the Dutch security service employees were paid for by CIA dollars.

The head of the Dutch security service, Louis Einthoven, was very important in bringing about this shift from the Brits to the Americans. He admired the American intelligence attitude, and from the archives (also in the National Archives in Washington) it seems that the Americans were confident that Einthoven would be a reliable and important partner as well.

Whilst much of the theoretical literature on intelligence liaison frames cooperation in the intelligence domain in an economic fashion (intelligence is worth something, if we give you anything, you should give us something back in return: quid pro quo), the Dutch case brought to light other influential factors as well:

The Dutch case shows, therefore that when we study cooperation in the intelligence studies, we should pay more attention to the deliberative, contingent, and personal aspects of intelligence liaison.

To watch the C-Span broadcast, see this link (presentation by the author starts around 36:10 minutes). 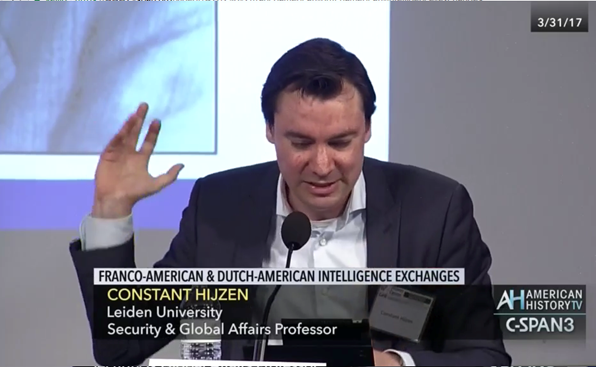