Ghosts from a (terrorist?) past: the Brabant Killers in Belgium

The recent confession of one of the possible members of the Brabant Killers renewed attention for the case. But, after all these years, what will this information lead to in terms of justice?

Note: Because the Brabant Killers operated within the Belgian borders, the content of some referrals may be in Dutch.

A police case involving a string of robberies and killings that happened over 30 years ago, a sudden deathbed confession to a family member who then feels compelled to come out with the story, and an old conspiracy theory that suddenly seems to gain traction again. The recent commotion about the so-called Brabant Killers (Bende van Nijvel) in Belgium, feels like an action movie (and one is actually going to come out in 2018). But does this new chapter bring an answer to the most important question we have?

First, a small summary. The eighties were for Belgium a time of political instability (ten different national governments!) and social unrest. A number of terrorist attacks were carried out within the Belgian borders (amongst others by the CCC and the Popular Front for the Liberation of Palestine). The fact that early 1982 a shotgun was stolen from a weapon’s shop, and a short time later, a car was stolen, were thus not that newsworthy. In retrospect, these events were the starting point of a three-year string of armed robberies and killings, concluding in a particularly vicious armed robbery on a supermarket in Aalst in November 1985. The common elements in these robberies were a relatively high level of violence, an advanced tactical attack plan, implying that the robbers were well trained and professional, but at the same time a relatively low return given the risks taken. No one has been convicted of any crime yet, and the statute of limitation has been extended by ten years when it was in danger of expiring in 2015. 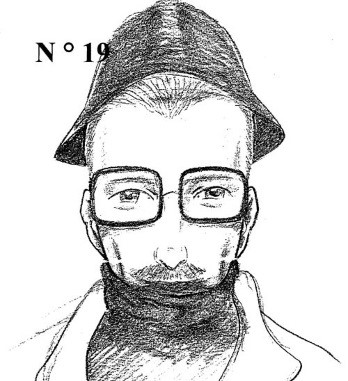 In October 2017, several news organizations reported on a story told by the brother of a former member of the now defunct Gendarmerie (a paramilitary police force). This former member allegedly confessed shortly before his death that he had been “the Giant” (see composite photo on the right), one of the members of the Brabant Killers. Additional elements heightened the credibility of the story: the person was off duty during each attack, when eyewitnesses stated that the Giant was limping, the personnel files showed a foot injury, and several associations were found with other people suspected to be connected to the gang. Finally, the tactics used during the robberies mirrored the tactics taught to an elite squad of the Gendarmerie, to which the confessor used to belong. This connection with the Gendarmerie sparked renewed attention for one particular theory posed early on already: the robberies were not criminal in nature but rather acts of terrorism, aimed to destabilize an already fragile political climate and pave the way for a more right wing regime.

So what answers do these new developments bring? We could finally be able to find out who committed these crimes and bring any remaining members to justice, but even that is the case, the deterrence and rehabilitation functions of the criminal justice system are almost non-existent with crimes that have happened so long ago, and even the retribution function loses its value over time.

We can perhaps prove that one or more members of the Gendarmerie were responsible for these crimes, but there are no more organizational lessons to be drawn from this knowledge. Prof. dr. Brice De Ruyver passed away only a couple of days before the new developments on the case broke out, but as the architect of the 2001 police reform, he would have eloquently made it clear that the police organization changed significantly since then, with additional internal and external supervisory mechanisms that would make a similar scenario highly unlikely at present time.

What remains important then? Survivors, families of victims, and society as a whole are primarily interested in the why question: the motivation for these kinds of attacks. For a recent example, look at the Las Vegas shooting, where the killer was identified early on, but his motive was not. Yet, the motive was still the center of the news story. Similarly, a big part of the picture on the Brabant Killers is still obscure. A possible reclassification of the Brabant Killers from criminals to terrorists, if true, would be an important step to determine a motive.

By knowing the question to be answered, we also should choose the method that maximizes the chance of finding that answer. Is a criminal investigation, which necessitates investigative secrecy and offers little protection against prosecution for people tied to the case, the best tool for this?

A momentum has been created by the recent developments, which is being used to put additional means into the criminal investigative team that is responsible for “finding the culprits and bringing them to justice”. Instead, we could redirect the necessary funds to efforts of restorative justice, similar to the truth commissions in Latin America and South Africa, as recently also suggested by professor emeritus Paul Ponsaers in a newspaper article, which could very well be a more effective strategy, and bring clarity to this decades old conundrum.

The author of this blog was born in and raised near Aalst, the city where the Brabant Killers conducted their last, and most deadly, raid. The author also wants to explicitly dedicate the blog post to Prof. dr. Brice De Ruyver, who taught him criminal law, and to never put his hands in his pockets when presenting.

Impressive. You had ne at "Ghosts".