How do students feel about intelligence related issues and how do their opinions change after learning more about these issues?

In my last blog I discussed the first results of a small survey conducted among students of the master Crisis and Security Management who are taking the elective World of Intelligence. In this blog, I will take a more in-depth look at the results of the survey, starting with the five statement students were asked to respond to.

The first statement was ‘I think privacy is more important than security.’ This is of course a classic dilemma that is also visible in the debate on the new Dutch Act on the Intelligence and Security Services. The graph shows that while students in general think security is more important than privacy, after a few lectures their opinions have swayed a little bit more towards the importance of privacy. A possible explanation for this is that during the lectures the methods and legal powers of the intelligence services have been discussed from different perspectives, possibly changing their views on the tension between privacy and security. 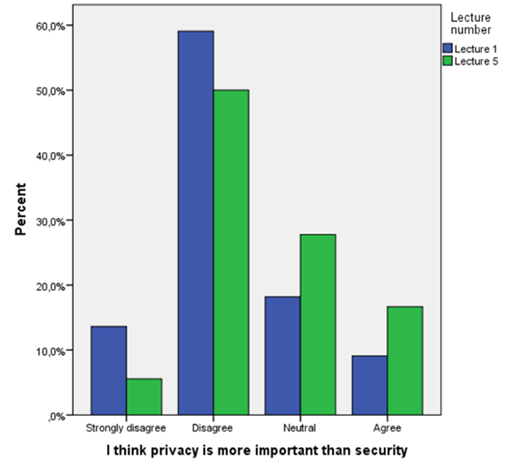 The second statement students were asked to respond to was ‘intelligence services make my country a safer place.’ In both surveys, student gave a mostly positive response, as only a few student indicated to feel neutral about the statement. The surveys also show that students’ positive attitude changed slightly to a less strongly positive stance after five lectures of the elective.slightly after five lectures on the world of intelligence. The complexity of the work of intelligence services as discussed during the course may have caused students to temper their enthusiasm a bit. 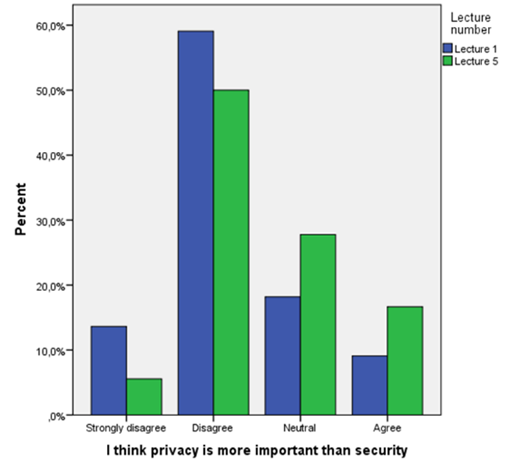 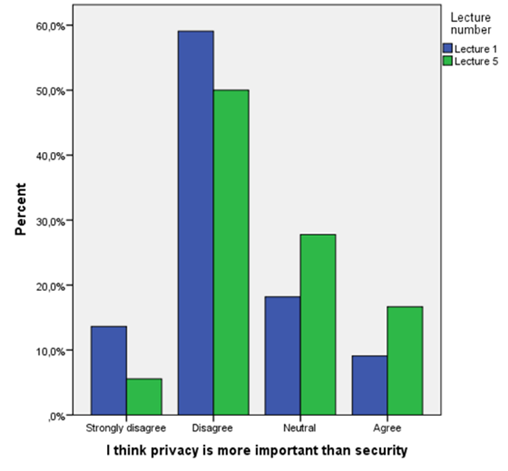 The fourth statement students responded to was ‘I trust the intelligence services to use their legal powers carefully and responsibly.’ Students in general gave a positive response to this statement: most students agree with the statement. We do see a slight increase in the trust of intelligence services after five lectures. A possible explanation for this could be that the guest lecturers who work in the field of intelligence discussed the dilemmas they face and how they handle those difficult situations. The insight that options are weighted and decisions are carefully made may have caused students to trust the services more. 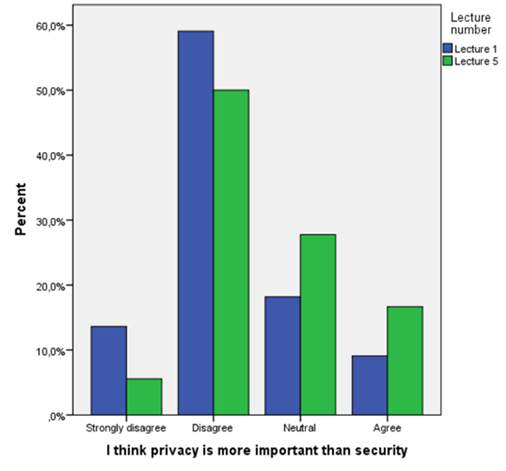 The last statement was ‘there is sufficient control and oversight on intelligence services.’ This statement shows the most differences between the first and second survey. While students responded mostly neutral to the statement at first, after the fifth lecture students mostly agreed with the statement. It should be noted that student filled out the second survey after a guest lecture of a researcher of the Dutch Committee of Oversight of Intelligence and Security Services, which may have affected the results.

Finally, we asked students to write down if they had changed their opinion on certain intelligence related topics during the course. Similar to the last statement, the topic that students mentioned most was related to oversight and control. Again, this could be due to the lecture the students just attended. Despite this, these results could still be an indication that oversight and control is an important talking point for the upcoming debates and needs more attention in the different forms of communication and information dissemination on the new Dutch Act on the Intelligence and Security Services.