The cleavage in Syrian Kurdish politics

When asked about how and why they became politically involved, no significant distinction existed between the respondents from either party. All experienced some form of repression, most were inspired by a Kurdish political leader like Massoud Barzani or Abdullah Öcalan. Half the repondents think of other parties not being capable. The only difference between PYD and KNC occurs when non-violence and equality come into play. Four PYD-members emphasized their party's focus on equality in society—in case of female activists (both PYD) including women’s rights. Five non-PYD respondents claim the choice of their party depended on its non-violent nature. When asked about the use of violence for political ends PYD members commented they are willing to use it in the case of self-defense. In four cases, choice was a matter of being influenced by relatives, loyalty to others, lacking other alternatives, or simple feelings of sympathy. The findings are included in the figure below. 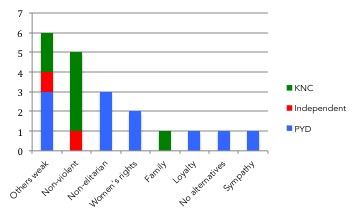 Why do Syrian Kurds join a specific political party or political bloc? PYD members emphasized they choose a party based upon social equality and accepting violence only on the basis of self-defense—all of which are reminiscent of the political thinker Jean-Jacques Rousseau. It is also revealing that Rousseau is mentioned directly by one of the respondents as having influenced his political thought. KNC-members emphasized they choose non-violent politics, and while other factors appear to be evenly distributed between both sides, the preference for social equality versus non-violence seems to be mutually exclusive among the respondents. The related observation that only PYD-members regard Marxist revolutions abroad as positive examples seems to confirm this cleavage within Syrian Kurdish politics. More research is needed, first to confirm the findings and, second, to explain where the preferences come from. Maybe that will help understanding why first the Erbil Agreement and later the Duhok Agreement between the two political sides failed, even though all parties were under threat of the Islamic State.