Macrolevel explanations of the homicide drop in many Western nations only tell half the story. The other half of the story demands that we zoom into the type of homicide.

Many Western nations have witnessed a homicide drop in de past few decades. The Netherlands is no exception. Homicide trends have been declining and this drop has been linked to the rise of civilizing societies and modernization. These macrolevel explanations, however, only tell half the story. The other half of the story demands that we zoom into the type of homicide. There is an increased realization amongst scholars that homicide can take many faces, each with their own underlying processes and influences. For example, the killing of a child carries different risk factors than the killing of a prostitute. Homicide research has begun to turn towards the study of subgroups of homicide. Examining homicide types allows us to unravel the complexities surrounding the homicide event. So far, little research has focused on how the different types of homicide are related to the homicide drop. Do certain types show a greater decline over the years compared to other types? If so, why are certain types declining, whilst others remain stable or show an increase? A better understanding of homicide trends can contribute to its prevention.

Before the second question can be answered, we first need to zoom in on the homicide trend. The Netherlands is one of the few countries that allows for an analysis of the trends across the different types of homicide. More specifically, the Dutch Homicide Monitor encompasses all homicides that have taken place in the Netherlands in the period 1992-2016. The relationship between the perpetrator and the victim (e.g. were they intimate, family, acquaintances or strangers from one another) combined with the motives of the perpetrator to commit the homicide (e.g. was the homicide driven by economical gain, sexually driven or with criminal intent), was used to determine the type of homicide. This allowed us to formulate the following types of homicide: (1) domestic homicides, (2) conflict-based homicides, (3) homicides committed in the criminal milieu, (4) robbery homicide, (5) homicides committed by a mentally disturbed and (6) sexual homicides.

In graph 1 the victimization rate of homicide per 100.000 inhabitants in the Netherlands is presented. In other words, the graph shows how many individuals per 100.000 Dutch inhabitants are a victim of homicide. The graph shows that in the early 1990s more homicides were committed compared to the last few years of the observation period. The years 1995 and 1997 marks the highest number of victims of homicide. In 2003 and onwards, there is a sharp downward trend. While there is a small increase observed in 2007, the declining trend continues till 2016 reaching the lowest victimization rate in the past 25 years. The homicide rate in the Netherlands is similar to other European countries, such as Switzerland and Spain. 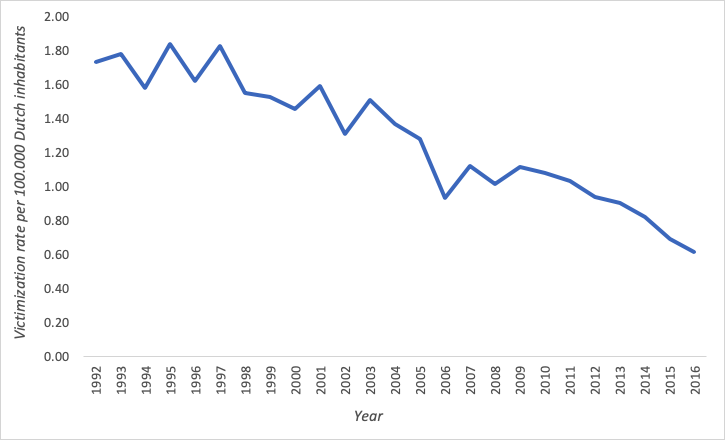 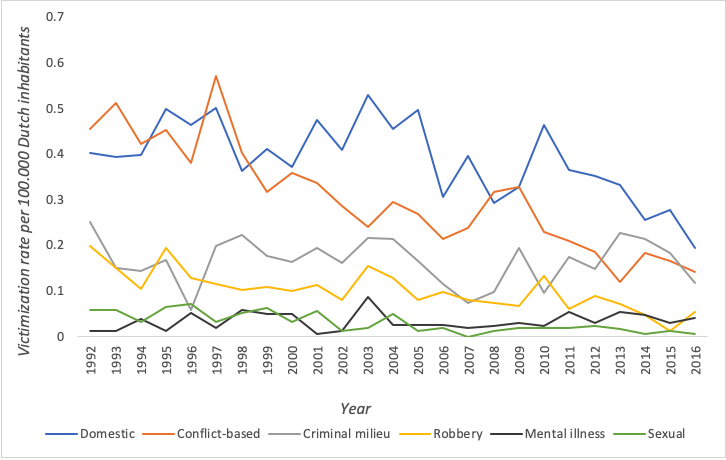 Graph 2 presents the trends in the types of homicides over 25 years. This graph shows that domestic homicide, conflict-based homicides and robbery homicides show the greatest decline. These trends are significantly related to the general homicide trend presented in graph 1. In other words, the trends of these subtypes seem to partly explain the overall homicide drop we are witnessing in the Netherlands. Homicides committed in the criminal milieu and sexual homicides show a small decrease and homicides committed by a mentally disturbed individual shows a small increase, but they are not significantly related to the general homicide trend.

These findings imply that a more detailed examination of domestic homicide, conflict-based homicides and robbery homicides is needed to further our understanding of why homicides rates are declining. Could this be because of a change in lifestyle where young men are more indoors playing games and thus avoiding hotspots of crime in public places, as is often the case in conflict-based homicides? Are we getting better in protecting ourselves and our personal belongings that reduces the likelihood of robbery homicide? And, does the improved access to professional help that allows women to seek help at an early stage to avoid the possibility of domestic violence turning into domestic homicide play a role? We are still nowhere near unravelling the complexities surrounding the crime of homicide and how we can prevent it. But by examining the trends of these subtypes we at least know where to start.